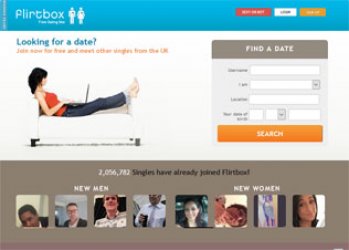 Running since 2007, Flirtbox.co.uk is a exactly what it says on the tin: a site for flirting. It is completely free and claims over 2,000,000 members. Due to its nonexistent costs, the site is very popular and can also be seen as a social networking site as well. In spite of this…

…we found Flirtbox to be somewhat superficial and lacking in quality.

This is usually evidenced by a lot of free sites. For more information, take a look at our article about how to find high quality, free dating sites.

Flirtbox is a UK based site, although it is possible to sign up anywhere in the world. There is a significant number of British members as well, so if you live in a large urban area you’re bound to have your pick. Those interesting in getting to know people further afield will also have a bit of luck.

Sexy or Not is probably the cornerstone of Flirtbox.co.uk and what it offers. It’s basically a rating system whereby you rate members on their attractiveness from a scale of 1-10. There is also a list of the hottest men and women, as voted by Flirtbox users.

When you search through profiles, you can choose either men, women or both. This is independent of whether you’ve set it as your preference or not. We could also click a little button stating whether or not we wanted to meet the user in question, which isn’t a bad idea.

Other Features on Flirtbox

Flirtbox users can block each other, add friends and use features like Questions and Answers, which helps you to find out more about the singles you’re meeting. For mobile users, there is an app version. As a free site, however, we found the actual interaction on the site to be somewhat weak. Great in principle, but Flirtbox.co.uk sometimes feels like a singles’ wasteland.