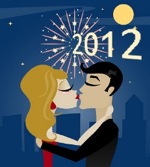 From dating agencies to sex contact - what can you expect this year?

Online dating platforms have grown up. But their operators are somehow nervous. What counts is creativity. And, from what we can tell, they have already started the process. Singles can certainly expect exciting improvements in 2012, some of which we’ll present in the following.

While 2011 didn’t entail any worldshaking innovations, operators want and have to come up with some really good improvements in order to stand out from the rest of their competitors. The pressure in the online dating sphere has increased significantly!

Taking a close look at the new online services that have been released internationally and particularly in the USA in 2011 will give us an idea of what to expect in Europe and the UK in 2012:

Online dating trend 2012:
Getting to your live date more quickly - and effectively.

Studies show: Singles have been complaining for years about first dates with online contacts being a total failure in 7 out of 10 cases. The main problem is usually the long lead time until a first date and the extremely high expectations that have built up during that time. Apart from that, the difference between profile picture and personal appearance is mostly unexpectedly crucial and a real disaster for both daters!

We can observe two important online trends that will gain in importance in 2012:

...to try and stay for free! Tempting and short freebies have always been an effective tool in the acquisition of customers. Just think of the fast food chain McDonald’s: when they introduced their 1-Pound-Products, everyone feared bankcuptcy. And? The burger survived.

This model was followed by the industry giant in the USA: the online dating sites know from experience that the first weekend of January is the very best. That’s when singles want to put resolutions into practice and are willing to pay for a dating site membership. The American market leader eHarmony offered every single all features for free on that weekend. And, rejoice, a huge number of singles, who had probably never payed for premium membership, are now addicted to eHarmony. ;)

Europe in fact lags behind the USA, the country of origin of online dating, but usually follows quickly. Thus: those who pay attention in 2012 will be able to try the best dating sites for free!